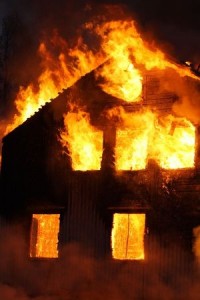 While a fire caused by an arsonist may appear and act just like any other fire, there are a few telltale signs that arson investigators look for after the flames have been put out. The amount of evidence varies from case to case, but even the most careful of arsonists will leave behind clues. As long as an investigator knows what to look for, the origin of the fire will almost always be uncovered.

There are several common signs that point to arson, including the nature of how the fire started and where in the building it began. Once an investigator finds the starting point, the cause of the fire can typically be determined. For example, there might be leftover debris from an explosive device, traces of flammable liquids, or even signs of breaking and entering. All of these signs point to arson because they indicate the fire was intentionally set off by a person, rather than the result of an accident or weather-related event.

If for instance some sort of fire accelerant is found on the scene, there are several ways an investigator can test it to learn more about it. A chemical analysis can be performed and canines may even be brought on to the scene to sniff for more clues.

In addition to inspecting the scene of the fire, investigators will question the property owners to learn more about anyone who may be a potential suspect. If a home or business owner was recently threatened, that is information that the investigator will find relevant after they have been the victim of arson.

From photographing the scene to performing a chemical analysis, there are so many ways in which investigators can learn more about the cause of a fire. If you have been the victim of arson, you can trust our team to get to the bottom of it!